The reports started at 7:49 AM via a KEEKEEKERR text by Cameron Cox that a fly-by FRGU was seen headed towards Coral Ave. from the Cape May Hawkwatch platform. At 8:06, Richard Crossley texted that a young FRGU was seen near the Concrete Ship and with understated prescience added the following words: “A good movement of them (FRGU) is possible today.”

The reports continued to multiply throughout the morning in Cape May as the possible good movement grew into an unprecedented occurrence of this species in the birding history of New Jersey. By 11:22 AM, Tom Reed exclaimed that 190 FRGU were seen in the Cape May area. Reports materialized from other parts of the state as well: Pt. Pleasant (Ocean County), Holgate, Spruce Run (Hunterdon County), Monmouth County, Mercer County, Middlesex County.

27 accepted records of Franklin’s Gull are documented in the New Jersey Bird Records Committee Accepted Records List. Most are of single birds except for another Cape May FRGU event November 14-15, 1998 when 51+ were tallied from Avalon to Cape May. The November 13 phenomenon not only obliterates that previous New Jersey record in the number of FRGUs seen but also in the statewide breadth of the sightings. Before the day was done, at least 310 Franklin’s Gulls had been seen in Cape May, including one flock of 62. In addition to those mentioned above, further reports came from Atlantic County, Burlington County and Salem County. 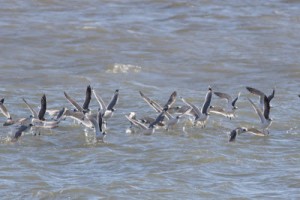 Other the next few days, a few FRGU were found at Cape May and a few coastal spots, but the main influx had vanished as quickly as they arrived.